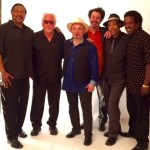 Springtime/Tribute to Muddy Waters in France and more…

Well it is time for Spring. That’s the only way to put it in the age of climate change.

On May 10th we went to Coutance, France and played Jazz sous les Pommiers. It was a celebration of Muddy Water’s 100th Birthday. I shared the stage with John Primer, Bob Margolin, Felton Crews, Johnny Iguana and Andrew ‘Blaze’ Thomas on May 12th. We also be celebrated the imminent release of Muddy Waters 100. This is a John Primer record celebrating the centennial of Muddy. The Edge of Town

I then returned to play with my group The Matthew Skoller Band (Billy Flynn, Felton Crews, Johnny Iguana and Marc Wilson) at Buddy Guy’s Legends on May 17th. A ball was had by all!!!

On May 22nd and 23rd I substituted for Vincent Bucher, one of my oldest friends in the world and one of the most accomplished harp players alive, with the group Heritage Blues Orchestra in Fort Worth Texas (22nd) and then San Antonio Texas (23rd). I met Bill Sims Jr. 15 years ago when we collaborated with playwright, actor and director Ruben Santiago-Hudson during the opening of his Obie award winning production of Lackawanna Blues at the Public Theatre in NYC. A few years later I introduced him to my brother, producer extraordinaire, Larry Skoller, who brought Bill Sims, Chaney Sims and Jr. Mack to his festival in Aulnay sous Bois. It was then that his idea for The Heritage Blues Orchestra took root. They did an album and got a Grammy nod. Killer group! The vocal harmonies between Bill, Chaney and Junior are lush and brilliant and each of their respective lead vocals are strong and personal. One of the best vocal groups anywhere and of course the musicianship is off the charts! It was a lot of fun playing with this group. And I look forward to playing The Chicago Blues Festival with them (Heritage Blues Quintet) on June 14th in Grant Park. So now I am settling into Chicago for the summer and fall. I just received my schedule from the Department of Cultural Affairs and Special Events for the Farmer’s Markets that I will be playing. I will play four markets per week at: Austin Town Hall (Lake St. and Central Ave.), La Follette Park (1333 N. Laramie Ave.), Columbus Park (Harrison and Central Ave.), Englewood (71st and Racine Ave.) and Pullman (111th and Cottage Grove.) I will post the exact schedules and accompanists when the information becomes available.

I also received a $5000.00 Individual Artist Grant from DCASE and the Illinois Arts Council to help record the next Matthew Skoller CD. So I will be trying to raise the rest of the budget needed to make the CD. Stay tuned!