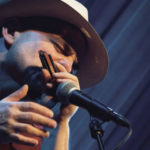 Rally in The Daley Plaza January 20th 3pm Chicago Movement for the 99%!

I will be performing at this rally which begins at 3 o’clock on Friday 20th. I have heard some of these speakers and I can attest to their power, incisiveness and eloquence. Not to mention that the poet Malcolm London, who has been described by Cornell West as the Gil-Scott Heron of his generation, will be performing as well. This is being organized by Chicago Movement for the 99%. There will be speeches, music and poetry for an hour and a half before the we march to Trump Plaza.