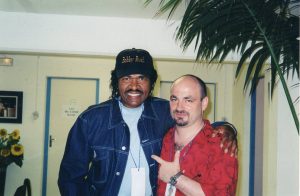 Bobby Rush and Matthew Skoller at the 2002 Blues Passions Festival in Cognac,France

As the Program Director of the Logan Center Bluesfest I am excited and anxious for this epic 3 day, multi-disciplinary, genre bending, inclusive and multi-generational event to finally happen!!

After the 2020 Covid postponement it was necessary to make many adjustments to the original line-up and program. Well we all know what necessity is the mother of and I must say what we ended up with has surpassed all of our aspirations! And when I say “we” I am referring to myself, Leigh Fagin (Senior Director of Programming and Engagement) and Charles Rumback (Jazz and Blues coordinator) and the members of the Logan Center team who assist us in achieving our goals.

The one evening that has remained unchanged since the global pandemic shook the planet is Friday night. And thank goodness! Our Daughters and Sons of the Blues event will celebrate four of the world’s most renowned Blues families: The Brooks, the Bells, the Copelands and the Taylors. The patriarchs: Lonnie Brooks, Carey Bell, Johnny Copeland and Eddie Taylor Sr. The progeny: Ronnie Baker Brooks, Lurrie and Steve Bell, Shemekia Copeland and Demetria Taylor. Whoa! History will be made.

On Saturday night we originally had a night of all younger generation Blues up and comers and their respective bands. As schedules changed and Covid did what it does I was forced to approach celebrating the generational richness of the Blues (by nature an ancestral music) by pairing two Blues masters who are separated by 6 and a half decades. Amazingly the legendary Bobby Rush was available for the gig! Acoustic country Blues phenom Jontavious Willis (who was one of the original younger generation artists booked in 2020) was also still available. I asked Bobby Rush’s management if he would consider doing half the evening solo acoustic and half with his electric band, inviting Jontavious to the stage during the acoustic set and he agreed it was a good idea.

This multi-media collaboration between young and George underlines the main theme of this festival: that African American music transcends the artificial borders of “genre”. That it is indeed a thread that evolves into different styles and incarnations but always possesses the spirit and energy of the root: The Blues. It also serves as a chronicle and document of African American culture. I think August Wilson put it best, he said that: “Blues is the bedrock of everything I do. All the characters in my plays, their ideas and their attitudes, the stance that they adopt in the world, are all ideas and attitudes that are expressed in the blues. If all this were to disappear off the face of the earth and some people two million unique years from now would dig out this civilization and come across some blues records, working as anthropologists, they would be able to piece together who these people were, what they thought about, what their ideas and attitudes toward pleasure and pain were, all of that. All the components of culture. Just like they do with the Egyptians, they piece together all that stuff. And all you need is the blues. So to me the blues is the book, it’s the bible, it’s everything.” -August Wilson. ‘Nuff said.

There will also be book signings and interviews with the headliners.
More Information
TICKETS